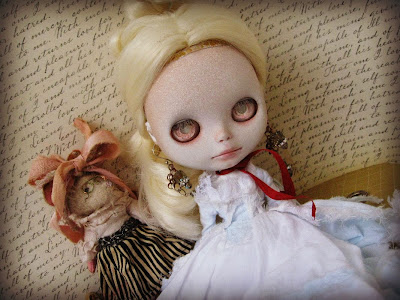 I was lucky enough to have been asked by Auguste Clown Gallery in Melbourne, Australia to participate in their February 2015 International Group Showing, "Once Upon A Blythe." I am so honored to have been asked. 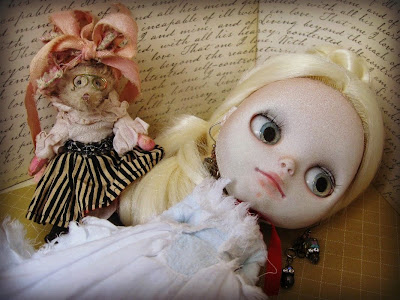 You might not know, or maybe you do, that I have a bit of a fascination with Marie Antoinette. Lots of doll and dressmakers seem to. She is really part of the inspiration for my making the little rats. I was thinking about little mice living in the walls of a French castle. What better one than Versailles? Since the topic of the gallery show seems to be just right for fairy tales, I wrote one around the ghost of Marie Antoinette and a little rat friend called Rosie. That was the starting point for my doll. 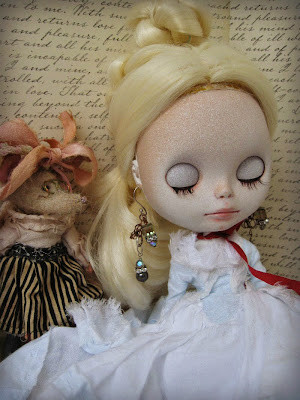 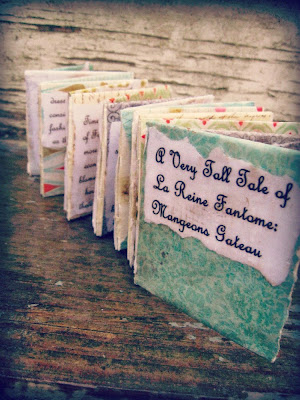 Once upon a time there was a beautiful young girl whose mother was a very powerful Empress of all that could be seen near or far. When she was still very young, it was foretold that the girl would find her prince in a land far from her home, in the great country of France. 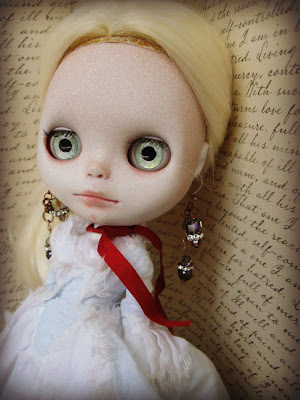 As was the custom, when the time came, she left her home, her mother, and her friends and family to be with the prince in his castle far away. She took with her 57 carriages, 117 footman and 376 horses, for she had many lovely things and did not want to be without. She was a spring bride and so very, very beautiful. Her wedding gown was the most lavish of all, spun from silver and laced with diamonds. 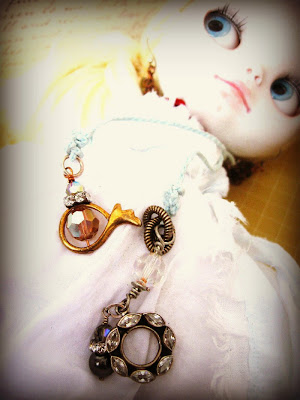 No expense was spared. She was very excited to be the new bride of a prince, and yet her eagerness was not rewarded. The young prince did not take easily to her, as he had his mind cast upon other things. Within a few short years, the Old King died, leaving the young prince and princess to become the new king and queen of France. As was tradition, it was expected that the beautiful queen would produce an heir to the throne. It was not that she was unwilling, but much time passed and no sons were produced. 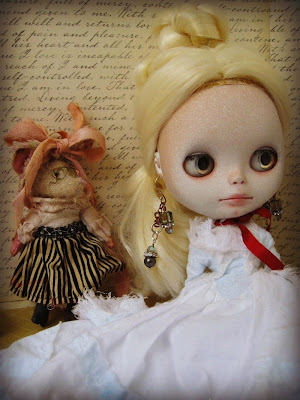 To pass her time and amuse herself, the young queen had a lovely pastoral retreat designed and built for herself and her closest friends, in which to pass their leisure. It was there that she became friends with the animals, especially the rabbits and the little rodents that scurried about the place, eating bits of cake out of the Queen's outstretched fingers. The little cottage world she maintained became a way for her to shut out the outside world. 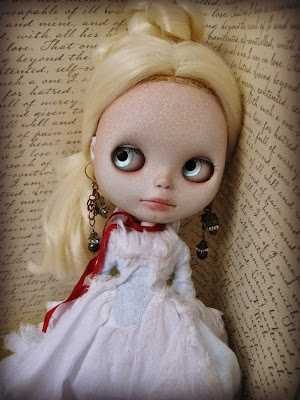 Her countrymen came to despise the lovely queen. Gossip spread like wildfire, accusing the beautiful queen of all manner of frivoloties. They believed she was living without care for the plight of her fellow countryman in a silly fantasy world of her own making. As the outside world grew restless, the queen retreated further and further into her perfect little dream-like world and saw herself as an outsider, unloved and unappreciated by her kingdom. 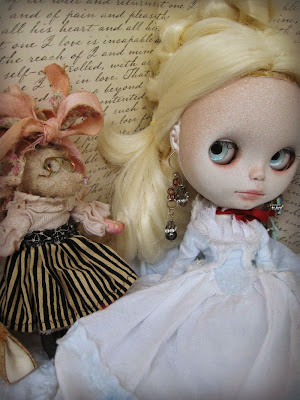 As is often the case, the ill-loved will bond together. The little rats of the queen's retreat, the most despised creatures in the animal kingdom, brefriended the queen. Rats, it seems, have quite a fashion sense. French rats, even more special than all the other rats of the world, were especially well suited as fashion advisors, dictators of style and good taste. 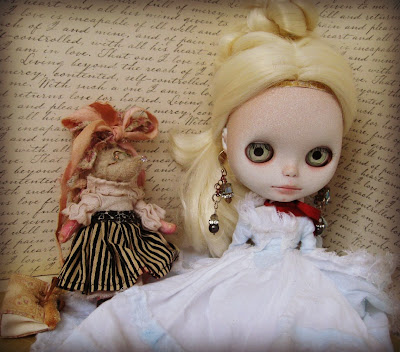 Within the boudoir of the queen's private cottage there existed a small hole in the side wall. It served as an easy entrance for the little rats who lived in the walls and in the garden. One particular rat, Rosie de la Reine, had arrived as a stowaway in the traveling bags of the queen's personal milliner and dressmaker. Rosie possessed considerable knowledge of the fashions of the times, as well as the how-to and what-for. She was the queen's favorite by far and Rosie was welcome within the Queen's little cottage, as long as she picked up after herself. 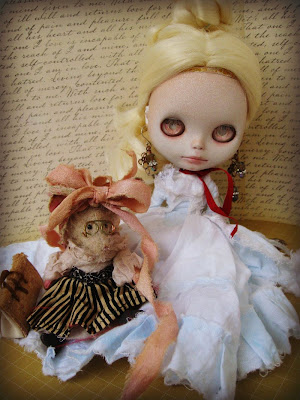 Time passed and the people of France became more and more dissatisfied with their economic conditions. They blamed the lovely Queen and her frivolous lifestyle for their troubles. They were no longer content to look the other way as the Queen supped on cakes and other sweets, while they themselves were without even a loaf of bread. First the King and then the Queen met their horrid demise at the hands of their countrymen. "Off with their heads!" the crowd exclaimed. 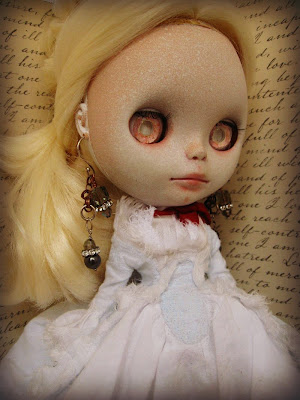 Rosie the Rat was so very loyal to her queen and beloved friend. She had slipped inside the pocket of the Queen's cloak on that fateful Queen's Last March, and had gone to the guillotine as well. Poor Rosie! Poor Beautiful Queen of France! Their only consolation was the knowledge that they had changed style and fashion in France forever. 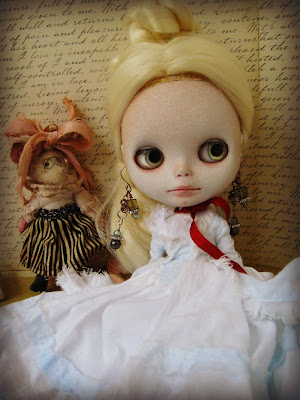 The tragic nature of their deaths caused such terrible confusion in the newly departed souls of the beheaded queen and her lovely rat companion. To this day they are ghosts, living within the walls of the Queen's boudoir, unseen and unheard, as they go about their business of reminiscing about the good old days of high fashion and mile high cakes. "Let Us Eat Cake!" is their daily mantra. 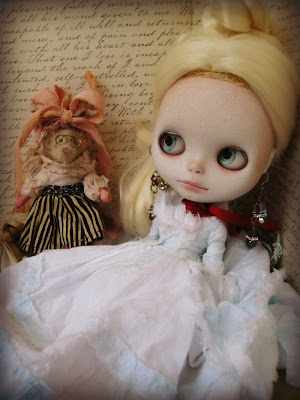 The customization, little book, Marie's dress and underthings (pannier, bloomers and petticoat), plus Rosie the rat, were all done by me.  Jean BaldridgeYates made the beautiful pullcharms and earrings. She has been graciously making jewelry and pullcharms for me for years, as well as collaborating with me on other things, including a book.  She is a great artist and often has things available for sale in her Etsy shop.  Thank you, Jean!  If you will be in Melbourne in February, be sure to stop by and see what I know will be at least 30 amazing Blythe dolls.  The gallery has a Facebook page where they update their goings on pretty regularly. Thank you Auguste Clown Gallery!  I am very excited to be sending this doll and her rat companion, as well as the little book, off to Australia, hopefully by the coming weekend. 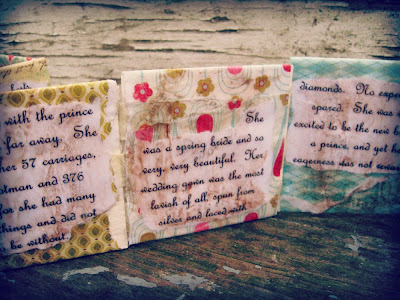