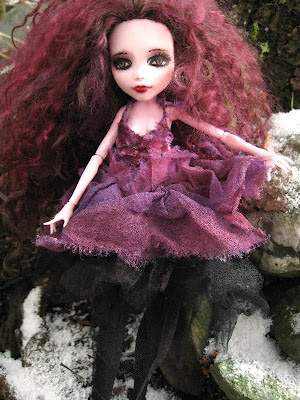 I recently tried my hand at Monster High dolls. I had done a boy MH doll for my nephew months ago but had not tried a female character. It took me a couple weeks to complete 3. The time involved is deceiving, or at least it was to me. The heads seem tiny, more Barbie sized than Blythe, so I thought the hair would be a snap. Um, wrong :) Firstly, you have to remove the hair, which is firmly glued on the inside of the head. You have to do that without ripping vinyl that is punched with holes. There are so many holes in those little heads, it is not to be believed. I think hundreds. 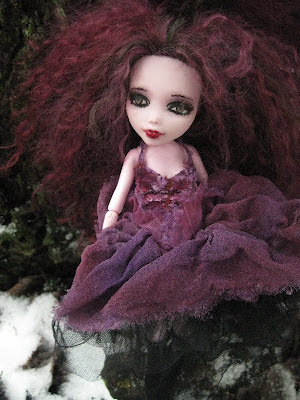 So anyway, for the first doll I used a wine colored mohair and laced it with a natural chocolate Wensleydale (sheep) locks. It probably took me about 6 hours to get in the head. That doll is named Wisteria. She was originally a Draculaura and has pink skin. I kept her costume all color coordinated to match her hair. I think she turned out well. 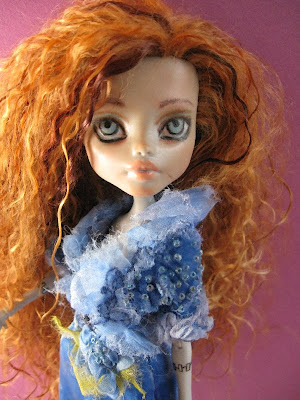 Thinking I now had experience with the Monster High girls, I assumed the second doll would go more quickly. Nope. Took maybe even longer than the first! She was orginally a black and white Frankie. The challenge of gray skin was interesting. I could have kept it gray, but I really wanted more color. So after stripping off her original makeup, I gave her a bit of a pinkish orange cast that is a bit green in some areas, but still definitely has a gray undertone.

I gave her paprika colored hair and a beaded blue velvet costume. She is a lot "darker" than Wisteria. A lot more Monster High-ish, if you will. She has a scar on her face and a dark story. Her name is Alyce in Chains. I like how she turned out. 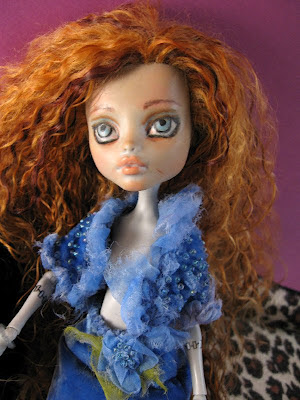 Finally, a Cleo de Nile. I pretty much changed her completely. No sign of Cleo in there anymore :) For this doll I gave her a multicolor, multitonal blues and greens Wensleydale locks root. The hair is curlier and a bit coarser than the mohair, which is what I wanted for this particular doll. 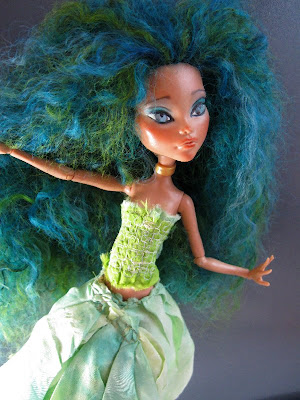 I gave her a slightly Egyptian feel, in keeping with her origins, but gave her more of a dancer's appearance. I think she came out very well. Her name is Aria Blue. 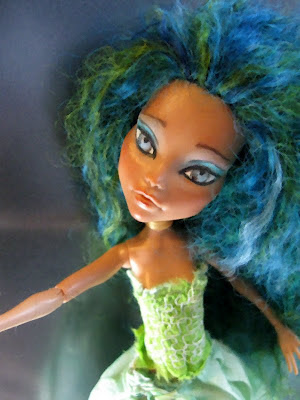 At this point I am back to Blythe. I have a new doll I just listed that I will show you hopefully this week sometime. I am way way way behind on my blogging and I am sure there are things that I wanted to show you that I have since forgotten. I hope you are all having a lovely spring and getting lots done. The light has been pretty good here on the days that aren't raining. Today, a downpour :)
Posted by CindySowers at 11:58 AM