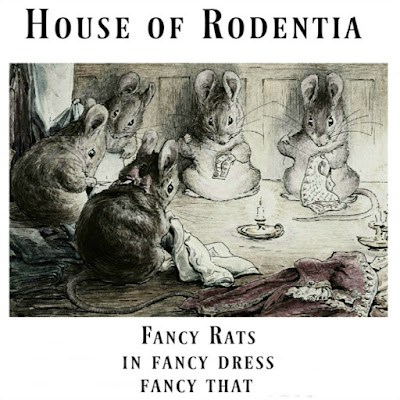 I don't really know how many folks these days take inspiration from Beatrix Potter.  A lot maybe, but  have never really bothered to query anyone.  I have always been a huge fan of small animals in human clothes.  Probably something weird about my brain, to be honest. The story of the Tailor of Gloucester is a favorite.  I especially like the opening paragraph that reads:


In the time of swords and periwigs and full-skirted coats with flowered lappets - when gentlemen wore ruffles, and gold-laced waistcoats of paduasoy and taffeta - there lived a tailor in
Gloucester. 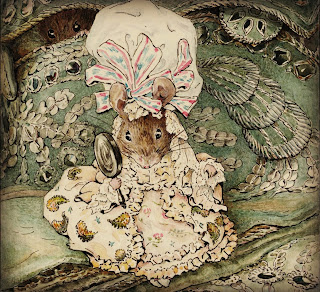 It turns out that the story was based on an actual tailor, one John Pritchard.  Apparently he had a similar situation to the tale (he had been given the task of making a coat for the mayor, but then, unfortunately, took ill.  Upon his return from his sick bed, the tailor found that his assistants had made up the coat for him in his absence).  He supposedly spread the story that fairies had done it, but Beatrix Potter liked the idea of mice assistants and so her version of the tale reads that way.  The opening words Potter used in her story, "periwigs," "lappets," and "paduasoy," hark back to the 18th Century, which is the style and era I like best to borrow from in my own miniature dressmaking work. 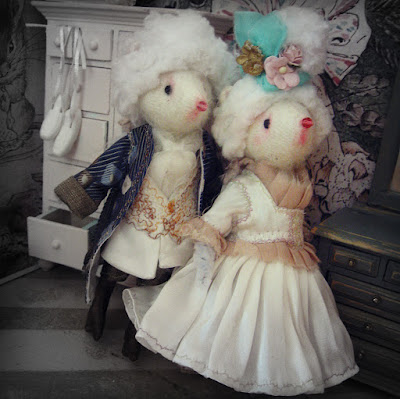 When I was a child, my parents took me to see Disney's Cinderella, or at least that's how I remember it.  I was pretty young on my first viewing of the movie.  What I most remember is the dressmaking assistants.  The mice!  I have kept that in my mind over the years, as well as the mice from the Tailor of Gloucester and always imagined that my own little dress shop should have mice and rats to do the assisting. I have been making rats and mice as miniature dolls since about 2015. I have sold quite a bundle of them.  Over time I have tweaked the ears and shape of the head over and over and over, and finally feel pretty satisfied.  The newest version has wired legs and arms, so a bit more posable. I have gone to a jewel nose, stuck with the German glass eyes and jointed limbs and head.  I have continued with the painted feet and quilting fabric arms and legs.  All in all, I feel good about them as they are today. 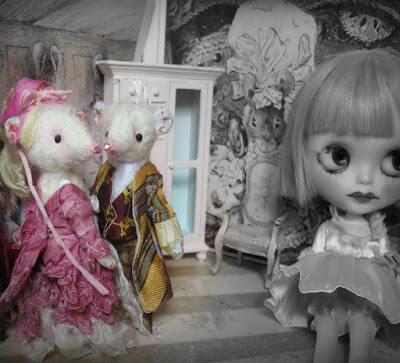 I have been designing miniature fashions now, well, since childhood.  I imagine my assistants as small mice and rats I have designed from mohair and cloth.  There are no actual rodents on the premises.  I have 2 trustworthy cats, after all.  The imaginary mice and rats are inspiration for miniature clothing that I like to make for small cloth animal dolls designed by me (rats, mice, bears, bunnies and sometimes others if I am in the mood) and the larger plastic Blythe dolls that I have had in my house since 2009.  I have recently given my miniature dress shop the name House of Rodentia.  I think it has a certain ring to it, though perhaps a bit crazy.  But, well... 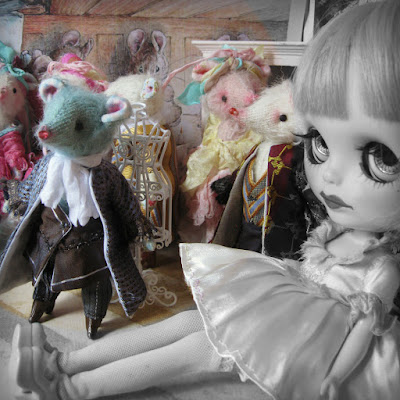 In my dressmaking, I often switch around, alter, or resize pattern pieces I designed for one thing, to go with things they weren't originally meant for.  Which leads me to the serendipitous discovery I made this morning.  The 18th century dresses, coats and waistcoats I have been designing this month for my newest mouse and rat dolls fit (although in a far shortened version) perfectly the Blythe dolls, the giant Alice girls that seem to have slid down the rat hole.  A girl's gotta have decent dresses if she finds herself in an alternate world, for goodness sake! This may sound silly to you, but to me, it is a boon.  Because it means that the clothing can be switched, and if someone gets one of these newer mouse dolls, they will also have a dress that their Blythe dolls (and probably other dolls as well) can share.  How's that for economy?  Always trying to be helpful :) 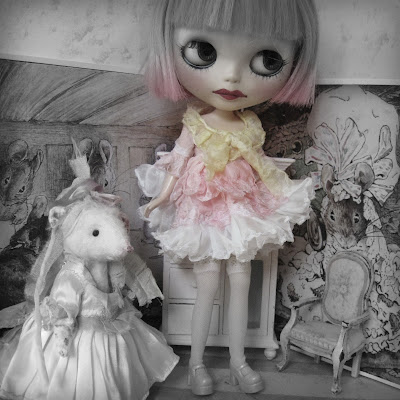 I hope your creative time is keeping you busy, happy and healthy.  It's summer here.  I am loving the heat! 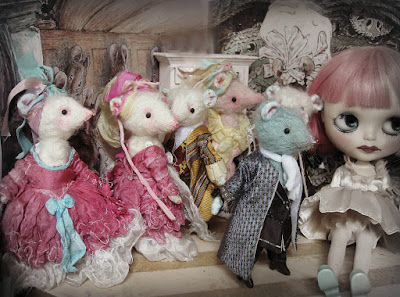 Posted by CindySowers at 2:48 PM