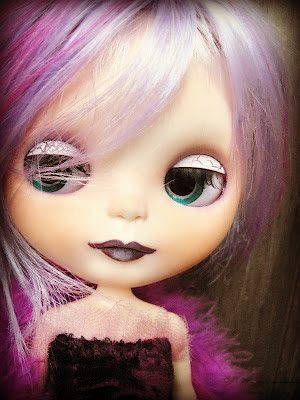 Two dolls in a row using the color violet! Not sure what possessed me, but right after customizing 2 purple dolls I bought a Prima Dolly Violetina. Also a purple doll. I must be in a purple haze! This is Astoria "Storey." She is a Simply Vanilla Blythe (FBL) I customized by overdyeing her hair to silver and adding in color all around. 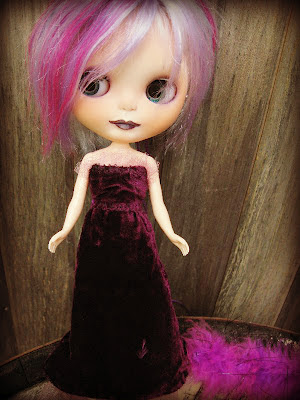 My friend hal halcut her hair, and in my opinion, she turned out smashing. She is very elegant, very stylish, just an all around glamour girl. Very happy with how she turned out. She has a bit of a tainted history at this point, but nothing that can't be fixed. When I overdyed her hair, I guess I was too impatient or maybe just distracted and didn't get all the dye stabilized. I had her here a week and nothing strange occurred. I wrapped her up really well in tissue and bubble wrap, and I think it was probably the bubble wrap and the heat of this time of year. In any case, by the time she arrived all the way across the country, some of the dye had bled out. Unfortunately up near her hairline, giving her face some unpleasant grayish spots. 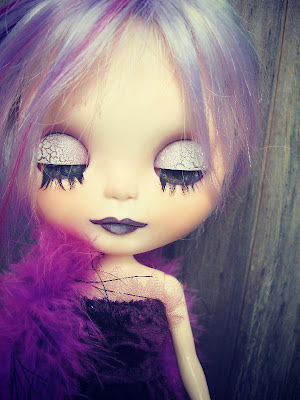 Long story short, stabilize your dye before you mail! Eeek. She will be repaired as soon as I receive her back, and she should go on her way as if nothing ever happened, I am pretty certain. The thing I have learned about these very expensive dolls is, all manner of things can happen. And I mean all sorts of things. I bought a Pure Neemo Flection body a few weeks ago and received it this past week. I had played with it for no longer than 20 minutes when I, no kidding, snapped the foot right off. The joints are loose and they come apart fairly easily. But I didn't just pull the joint out. I actually snapped off the peg that serves as a joint. Broke it right in two. That body now has a polymer "cast" on the foot and will only be able to wear boots unless I paint it real well. Those bodies in the US come to a $40 expenditure. Basically $40 out the window in 20 minutes, because it can't be used for any for sale doll obviously. Not a huge market for dolls with casts! :) 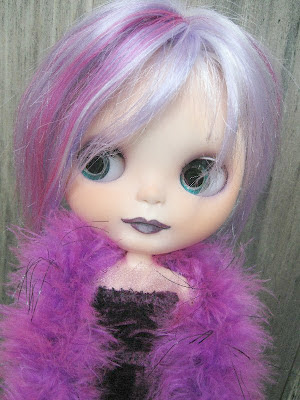 What can go wrong with the hair, the face and the bodies of the Blythe dolls while you are customizing them, well the list is long, believe me. It seems easy enough to customize a plastic doll. If you do, expect to ruin some, to have things in the eye mechanisms that drive you to insanity, to have to deal with unruly hair that won't go right no matter what you do, to have strings break, eyelashes fall out or ones that won't go in place properly, eye chips mar or crack, scratches appear where they weren't 2 seconds ago, Pure Neemo bodies fall right out of the doll's head, screws strip and be near to impossible to remove, eye chips that refuse to come out of the sockets when you are trying to change them to something different, finishing spray that pools up in the wrong place, makeup smearing right after you just thought you had brought it to perfection, lip gloss that runs onto the face before it dries, resistant spots in the blush that are lighter than the rest of the cheeks, clothing that shouldn't stain, stain the doll legs so they now look like they are wearing pants permanently, and so on. The list is nearly endless. 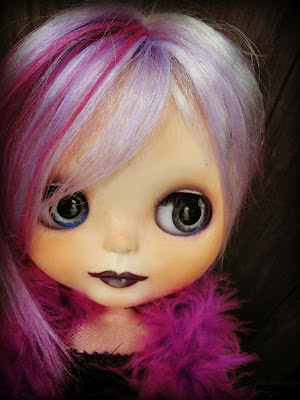 It's all a learning process, and so far nothing major that I haven't been able to make better has jumped up and bitten me, but I learn all the time. I guess there I am forgetting the doll whose nose I pierced and basically obliterated one whole half of her nose. Even that can be rebuilt. I haven't yet, but it is within the realm of possibility anyway. No wonder I am in a purple haze! I won't forget Storey. She's a really cool doll. In the end it's really just playing with dolls, and certainly not rocket science! :) 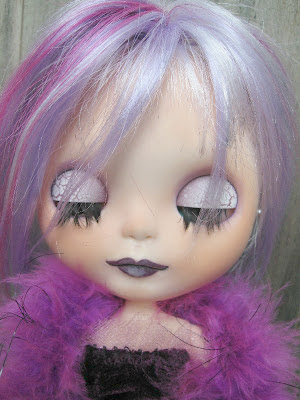 Posted by CindySowers at 9:16 AM